A prelude to all and a matter of conversation was the week-or-so earlier Grammy ruminations of Bob Dylan who suddenly and mysteriously appeared under the guise of Sensitive Bob.
http://moontravellerherald.blogspot.com/2015/02/sensible-bob.html

Bluegrass Drone Dancers Make the Night
"Did you see that girl?"
"The one in the flowered dress?"

But before that the table was set. 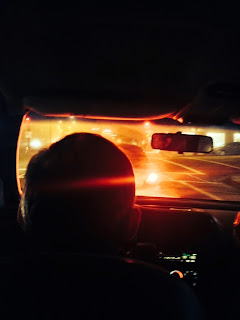 Disgorged – I was spit out really.
Out from the modern streaming BART in the tunnel dark. Glen Park!
And up the escalator into the night.
Where it's a street it’s a neighborhood and the families and friends are re configuring at the end of the day.
It is different than the bing-magneto-voucher-spoot BART tube.
It is end of the week, the kids from ballet. To pick up some tamales. The couple to the Friday tryst. And this Chrysler Van pulls up – I'd been forewarned.
Got three doors.
Bumps up comically on the curb, really.
And Jim and Dave in the front, with Jeff and me now in the back, will make a infinite loop of cosmic spark. - Jack Vaughan

There we were - though of course it's going to depend on where "there" means (don't fade away); but life cycles brought the four of us to that place in time - together again, a rare miracle - ready, ready's anybody can be; music guided the trip as we motivated over the curbs and hills of San Francisco, a timeless calendar of expressionist art forms: I gotta chimney made on top, you know it's made from a human skull...sloppydrunk already signifying and we had but started the evening, the sing-along constant and loud, and that's what friends are for to share braggadocio and vicariousness: you know a gal who's red hot and not doodly squat all at once, ya know? And yet we're ready. Tough guys with teeth eating Baby Blue bbq, drinking beer, wearing scorpion hats...Where to but to Lucky 13 bar, to be the old guys in the know, probably hipper than we've ever been but expressing still amazement at life playing pool drinking Belgian Chimay, for dog's sake we mellowed down easy, the fine and tasty jukebox I bragged drowned out by crowd roar, so we ogle youngblood as innocent bystanders since our gals don't stand no cheatin', don't stand none of that midnight creepin'; but even that, no, especially that remains understood: our hands have remained steady on the gospel plow far too long to waver at a short skirt that doesn't care we exist. But we do! We exist mightily and the train we ride's got more coaches than you can count cuz we're still doin' it: you know, moving it, grooving it, like sex machine men. We part the haze and find ourselves in the Richmond where else in San Francisco could the music sound so high an' lonesome when San Diegans sound like holler boys from ol' Kentuck. The bar comforts Dave's cold, keeps Jeff's and Jack's ears stimulated, and Jim has to dance just once cuz it's there in the air and we are satisfied. We're moanin' at midnight. Took turns being the designated driver on the way home while never braking even once. The truth had struck us all at every turn, every sweet note of that night, and coming to roost we shouted ever louder: "poetry nothing, music nothing, painting and dancing nothing; the world's great books a great set of nothing, nothing, nothing, no-thing!. (cue: Sunnyland as Woody the Woodpecker). - Jim Haas


Dave shares from a pitcher. 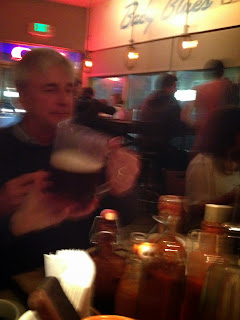 Jim ruminating : What will I do with eggs this Saturday? 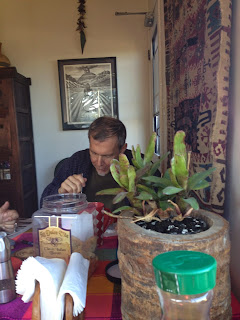 Jeff ask Does this sound like work to you? 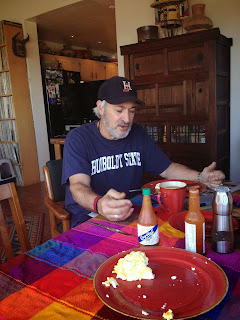 for dave Eating eggs is befitting. Who lent who On the Road? Who said let's go on the road - tomorrow! Who decided the next day to delay the trip and go to school? How crucial Jim's planning, in working, saving, and attaining Jane, the International! 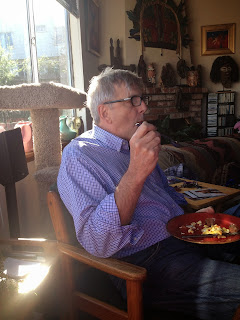 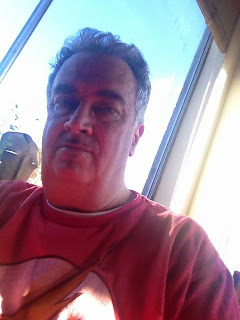 With my friends I can say what is on my mind. everything is something that reminds me of something that is interesting and they patiently agree. I call that love. 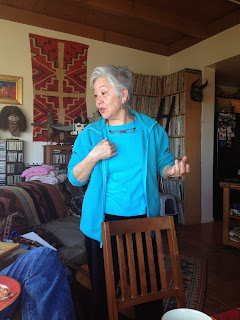 Oh great rememberancer, saint of San Franciso, look with favor on the blind scribblings - your people. 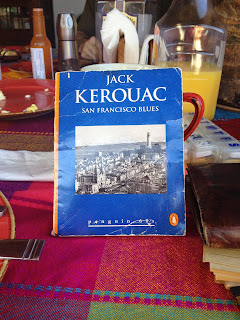 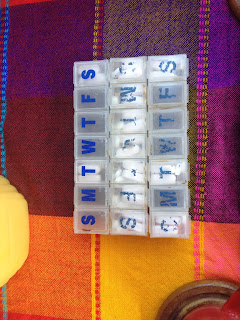 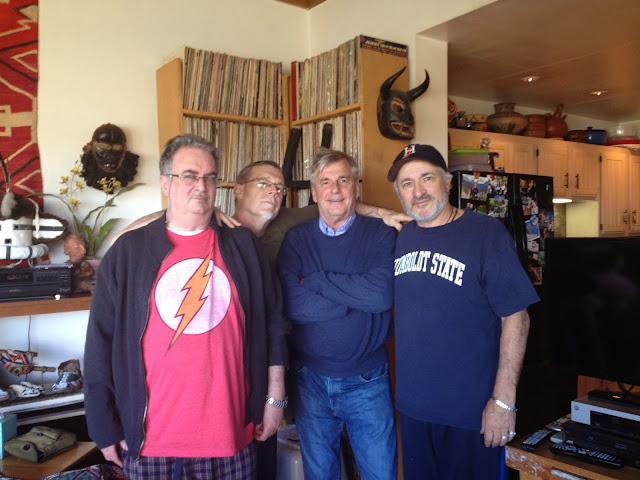 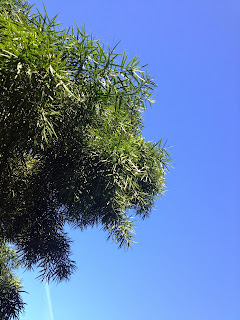 Driving down the Highway 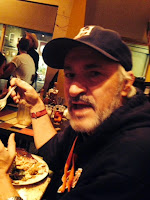 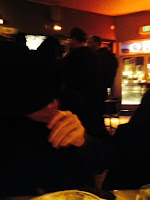 Does your panorama lose its flavor on the bedpost overnight?

high on the mt looking down on the city 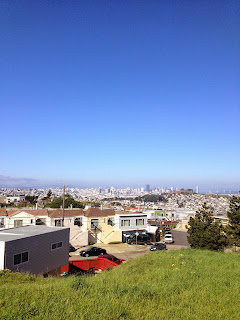 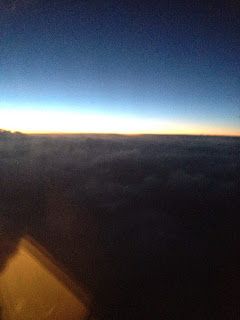 While Jim and Claudia were saving the planet with a Solar panel sales man upstairs, Jeff and I were playing music in the basement. We recalled Ernie Banks who'd recently passed over. Note I do believe this may be a happy way into all the recordings (which are individually linked below) cause it may Just Play On Auto. 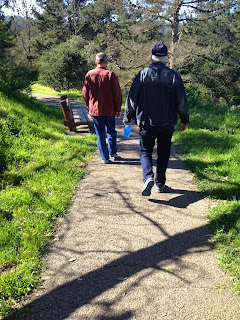 jee...for a guy going through the worst winter in boston history it was kind of sharp to be out in the sun. in the 60s. we went to the jerry garcia music shed. fftttt. and then toward the mission or somewhere.... the greatest tamale since Wes left us.

The next morning we chat over breakfast.
Remember when we saw Leonard Cohen? [Did you ask if he wanted to write a song with you? Reference to the time we met Dylan.]Would you want to visit Mississippi? Meeting a cowboy stuck on the road back in the days. Jeff:"We didnt have long hair cause we had got haircutsl" How much a snow in Boston/ And guitar interlude of Hoodoo Man with Jack and Jeff. (Had all this audio, and attaching random pics and putting on YouTube seemed the way to do it...)


Jim made a road tape. One with power to alarm beasts within civilized frames. I taped the boys singing with the tape. The better to conjure the karma wid.

Back in the day.. Jeff and Jim on the roof tops of NY 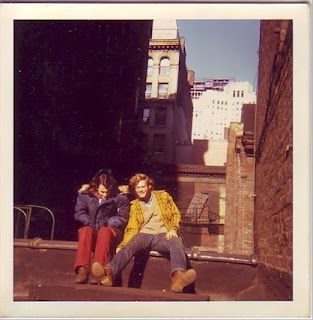 Jim and Dave with Jane, the International 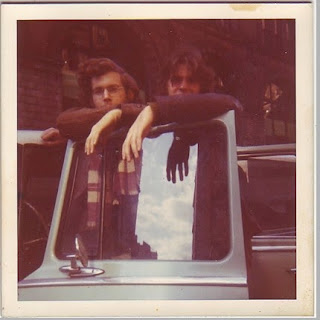 Yee-haw! Hella night! You boys must be just a little tetched in the head to sing the way you do, though. You got any of that stuff left and what'll it cost me?

I think it is called a Pink Badger.

MOON ALCHEMY - When the Apollo 8 astronauts were circling the moon on Christmas Eve 1968 I was probably having a little Christmas nuzzl...

Jack Vaughan
I am a Boston-based writer. My interests include both art and technology, but most especially where the two meet. I wrote the 1990 blues poetry book "Sunnyland Blues" together with Sunnyland Slim, and count Sat morning blues music, Sat afternoon horse playing and Sat evening comfort food cooking as hobbies.