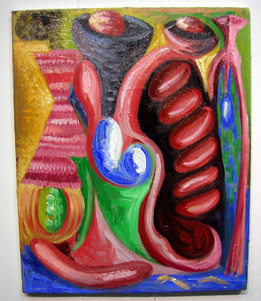 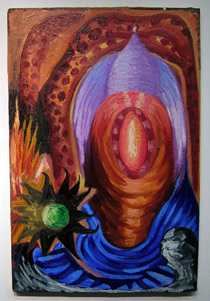 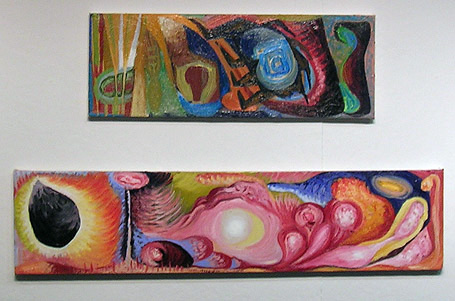 Jeff Hull came by recently to check Jake’s portfolio. And we kind of looked at some of Jeff's own more recent stuff together. Which is on the Web via some shows he’s had in recent years. Now I am stuck as anyone reading this will agree with words. Which provide a poor translation of what goes on in true visual art. Here goes.

Jeff Hull’s paintings transcend a life time; they cut through blue paradises of art think and explode, exotic, rich and watery. The ordinary world is here, and is seen in a universe of visual indications. Cells of modern mind float on the canvas, and one painting enters another. Images flop along side stones emanating molecular progressions. Color is all over the place, and you are on a magical ride. This art is feedback music in the domain of the eyeball. 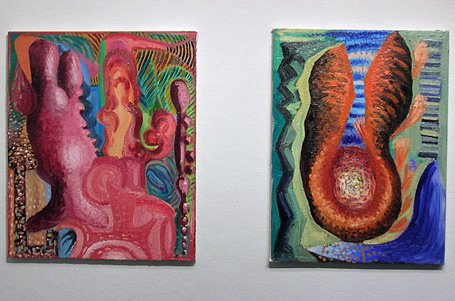 The sky, the ferns the beat. I see stories. I apply cut-up technique. The stuff pops up at you in spectral neural displays. Jeff’s objects comet forth. You attach what you bring. Ferns, boobs, dripped shapes, and brain classes, not to mention an expressionist conch or two. All on the slide in time. A Madonna becomes a sponge. Animated pearls talk baseball with mache tear tucts. The weather: Well, Jack it is Extremely Cellular. Hull art glows biological. Shapes. Shuffle on organs, Saturn moon and starfish virgin. Shifting symbolisms that you can intercept.

While Cristo was wrapping the hills, Andy Warhol was going to Hampton parties, and a nation of spray can users was poking holes in the sky, Jeff Hull and I were living the life of artists in Boston. It was the mid ‘70s, I pecked typewriters, Jeff dripped paint. Rent were cheap. It was the Bicentennial.

Jeff Hull and I go back a long way. We met in college days at B.U. Mugar Library with a whole bunch of artists. Bob Ganong, Gordon Thomas, Debby Kamy, Carol Keller. And it was a great kick in those days to hangout and working together in the library, as I learned a lot about how art works watching them go through art folios and reacting.

We worked the night shift and would often go to the bars [Dugout; El Phoenix Room; The Blue Sands was memorable among others] on the way home and talk art and sports and so on in the great tradition of being young. Did much together. Helped Jeff move a giant paper mache Squid down Hanover street early in the A.M. – was same day I first saw a Sea Urchin. More.

We masqueraded in strange fruit in performance piece of Cindy Thomson on Georges Island July 4th. Many July 4th parties on Mission Hill. Loft parties. Once, Pere Ubu appeared. One where there was a chalk shape on the cobblestones as we left. We all [maybe not Carol on this one] traipsed down to see Jerry Lee Lewis at Lupo’s Heartbreak Hotel in Providence. And on.

I looked at the animus of art from the outside until I worked the night shift with the B.U. Fine Arts crew. Much like musicians nodding a beat. That was how the guys would grok on the art folios. And more than writers or musicians even the painters were the true breed of artist. For me anyway. And Jeff who was the most abstract and expressionist of those I knew. It has been noted that poets and artists have a special affinity. And Jeff and I once collaborated in an installation at the Atlantic. We did stuff! When I look at his art, it’s a prism into the world we share. When I needed Eskimo-style deco-graphic bands for my Sunnyland Blues cover design, he dashed off 150.

Bereft of words for art talk I went to look up Patrick Maloney. Mission Hill artist, and as it turns out, a friend of Jeff’s from wayback. Patrick had not seen Jeff’s more recent works, so I laid it on him, and the effect was like This Is Your Life. Patrick too sees stories here. And there are things he’d like to see, but does not. Here goes:

They are dense, in your face. He is definitely respecting borders.Iit reminds of Mexican muralists. There are a lot of biological symbolisms. Elements look like human organs - ovums - nutty glowing - glowing uranium. A part here reads like a conch. Then a shell with a pearl inside, or tear ducts. Rare bits of air space. Like a report on cellular weather. Kansas tornados. Lightning.

One may read like a night painting .. another like a day painting. The paintings are extremely original although thye read like other painters. Including Boston painters. He uses exotic, rich textures. As you look at them, you keep going around but you don’t land anywhere. The focus is always shifting. But they do feel a bit confined in the rectangle. Collage is implied. A feel of d’ Chirico.

This one may look like a still life of gizzards - fantastic. The color palette is all over the map. These can be hard to look at. They are dreamlike, but I’d like to see them explode through the plane.

We talked about his art. Jeff and me. On Sundays this winter. He is not hot on attaching words to what was going on. Certainly one of the things that makes his art is that he does not think about it in a conventional way. Which makes issues for the wordsmith. Puts it more in the realm of, well, art. Therefore the varied methods of presentation here.

He doesn’t build his work around stories .. so I wont attach stories to them. His hospital series drawings somehow seemed to take the objects he’d been working with for years and turn them into now hallucinogenic pictorializations of modern medical procedures and their associated bacterial cells, electronic measuring equipment, proteins, blood tests, DNA strings, and the like, boppin around in a colorful trance.

Says Jeff: “I invite people to read into them. Because I think that is part of the journey.”

Says I “There is something molecular or cellular about this.” Say Jeff: “ I think – abstract paintings should not have just one meaning.”

But I think he has a scientist’s view, in his way.
at May 14, 2006
Email ThisBlogThis!Share to TwitterShare to FacebookShare to Pinterest
Labels: jeffhull

VERTIGO....JEFF'S ARTWORK HAS MY BRAIN DOING A 360'...SORRY BUT HIS WORK REMINDS ME OF BENIGN GROWTHS REMOVED FROM SURGERY,ITS KINDA SCARY!!!

Hi, Patrick Maloney here.
Nice report, Jack.
I love Jeff Hull's paintings.
He paints what's in his mind,
not what's on his mind.
Boston painters like to condense the immensity of their thoughts
into tight pictures. Jeff explodes
on his canvases. He obviously paints what he needs to paint, not what he's expected to paint.
Cool guy, great painter. pat

The blending of the colors is really eye catching. There's a lot of movement and energy present!

Patrick. Thanks for taking part. Honesty is key. And Jeff's art is true art for sure. Let's hook up soon.Jack

too good to be ignored by the gallery hierarchy. you can look at the work without having to read signs of explanation telling you what to see.

I found more of his stuff at

Truly something. A definite cross between Charlie Parker and a bottle rocket. Not afraid to use color to render shapes that proclaim loudly. Say HI TO FORM

See the latest work of Jeff Hull on his newly updated website http://jeffhullartist.com/